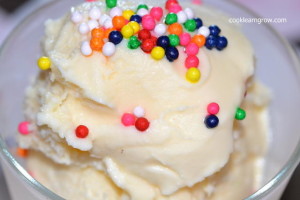 Lucky us, we live not too far from America’s #3 largest Ice Cream producer-Blue Bell!   So I called up the niece and nephew’s mom and asked if they could come for a playdate. 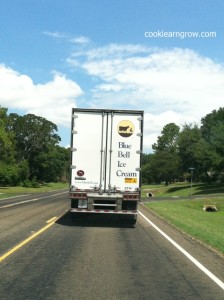 So we headed out early Friday morning for our Lala playdate and ended up behind this truck.  The nephew said, “Hey Lala, I bet if we fowwow that truck, maybe it will show us how to get to the Bwue Bell factory”.  Smart boy, he is.

The neice, who sometimes acts like a parrot said, “Hey Lala, I bet if we fowwow that truck, it will show us how to to get to the Bwue Bell factory.”  I told her what a great idea she had!

99 miles and one potty stop later, we arrived! 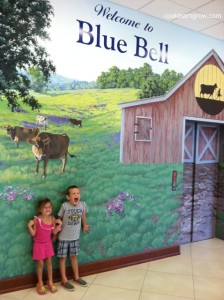 Excitement was building.  Not only that, but the building itself is a BIG building. 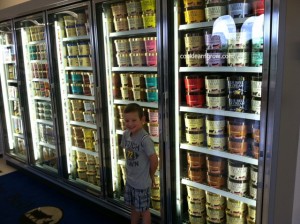 The nephew could not believe all of the flavors, so he asked if there was any way he could choose 2 flavors instead of 1 because he couldn’t decide.  Such a dilema, poor kid. 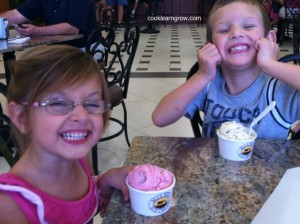 We had to wait 55 whole minutes before the next tour of “the kitchen” where all the action happens, so we decided to have Backwards Lunch day and ate ice cream for lunch and pizza for dessert.  That happens sometimes, you know.

The princess in pink chose strawberry because it matched her clothes.  Sweet girl, she is.  She didn’t have any other “great ideas” just yet because she was busy being cute and precious and pink.  I love her so much that I thought about getting her a twitter account.  Then I talked myself out of it because the world is not ready for that.  You’ll know when it happens.  Trust me. 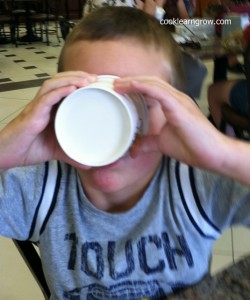 It was almost time for the tour, so the nephew hurried to finish what he calls the best part, “drinking it”.   We went on the tour which is super cool!  Unfortunately, they don’t allow picture taking during the tour.  But we learned so much and saw so much ice cream! 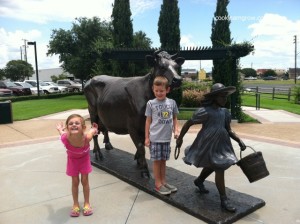 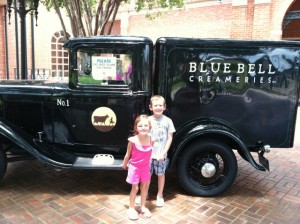 After the tour, we played around the Blue Bell Cow and one of the original delivery trucks.

Then we bought a few souveniers in the gift shop including a cute little pink dress for Baby Sister who wasn’t able to join us.  She will soon, though and we can’t wait! 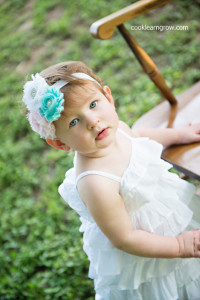 If you don’t have blue bell in your freezer, you can easily make your own ice cream. It’s super easy and you don’t really need any fancy equipment.

I’ve left you a recipe below.